Does controversial children’s literature have a place in the classroom?  I give you the example of The Story of Colors by Subcomandante Marcos, a Zapatista rebel. 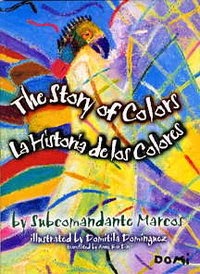 But first, a little background info.

2014 marks the twentieth anniversary of the Zapatista uprising in Chiapas, Mexico.  If you aren’t familiar with the Zapatistas, you can access the Wikipedia article about them here.  Put simply, they’re a group of (mostly indigenous) people who declared war on the Mexican government to protest the emergence of NAFTA and to demand human rights for indigenous Mexicans.

They identify with anarchism and libertarian Marxism, which might sound scary to some.  Also off-putting to some is the members’ wearing masks in public in order to preserve their anonymity, represent their egalitarianism, and to identify themselves with the Zapatista cause. 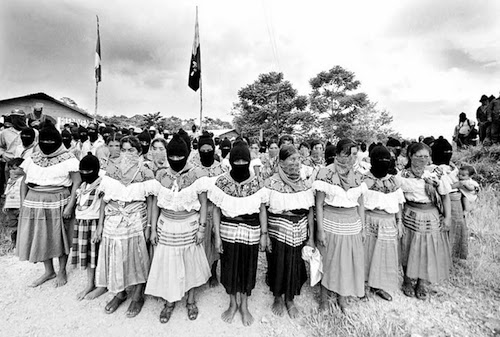 They might make you uncomfortable, but take a look at some their demands for their community:


Many may not agree with their ideology, belligerence, or the way they go about their business, but those demands make sense.

Back to the book.  The Story of Colors is a Mayan folktale put into writing by Subcomandante Marcos, one of the Zapatistas’ spokespersons.  He relates the beautiful tale of how the gods created colors out of a gray world; and Domi – an indigenous Mexican artist – has created stunning, vibrant pictures to illustrate the story.  It’s an exquisite peek into southern Mexican Mayan folklore, and I highly recommend it.  (For a more detailed review, click here.)

This question, however, looms: Should teachers read this book to their students?  The illustrations depict Subcomandante Marcos wearing his mask, which might raise some questions amongst young readers.  Teachers might have to explain who the Zapatistas are and what they believe.

Also, there are references to sex in the book -- they’re hardly graphic, but they’re there.  For example, here's how Marcos describes the dawn: “The gods woke up after Night had said to Day, ‘Okay, that’s it for me – your turn.’ And the men and women were sleeping or they were making love, which is a nice way to become tired and then go to sleep” (p. 10).

This selection shows readers that different groups of people have different attitudes about sex – it seems that Marcos sees it as a natural occurrence, no big deal.

But should we start that conversation with students?  Would you?

Honestly, I would censor the sexual bits if I were to read this book with very young children (the age group I work with).  But I think this would be a great text to use in a Mexican American Studies or general history class with older students.

As for the illustrations portraying Marcos’s masked face – if a child questioned the presence of the mask, I’d ask them why they thought he was wearing one.  That could lead to some fruitful and interesting discussion about the different things masks can symbolize.

Anyway, what do you think?  Does a book like The Story of Colors have a place in classrooms?  Would you use it with your students?  If so, how?