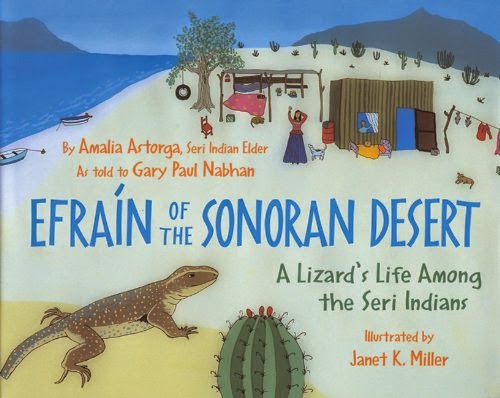 It's Native American Heritage Month, and while we we're hopefully considering Native American issues (both historical and contemporary) year-round, it's a good time to collectively focus on the diversity and contributions of indigenous Americans to within their communities and larger society.  (And by "Americans," I mean North and South Americans.)

Therefore, I'll be taking a look at a book I've been wanting to review for a long time -- Efraín of the Sonoran Desert.  This book tells of the Seri people (or Comcaac, as they call themselves) of northern Mexico and their relationship with endangered local lizards. 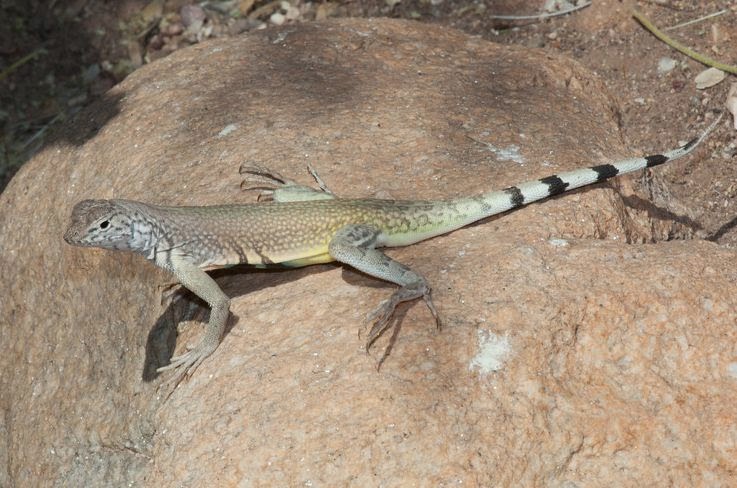 In an introduction, famed ecologist Gary Paul Nabhan shares a story about a visit to a Comcaac town, where he notices that several species of endangered lizards are thriving around the people.  His curiosity leads him to ask a local woman, Amalia Astorga, what she knows about the animals.

At this point, Astorga assumes the role of narrator and tells the tale of her friendship with Efraín, a lizard she nurtured for seven years.  It becomes clear that the Comcaacs' care for local animals is helping them thrive while habitat destruction in other parts of the desert is endangering all kinds of wildlife.

Overall, I have mixed feelings about this book, but I'll start my review with what I like.  First, I like that Astorga shares her own story -- she's even listed as the author of the book.  Since the dominant culture so often silences the voices of indigenous people, it's wonderful to see that Astorga's voice is included here.  Her story matters.

Second, I like how this book privileges the Comcaac people's views on conservation.  In the Americas, our way of "doing science" is heavily influenced by European-style research and practice.  We tend to trust knowledge backed up by intricate instruments, the scientific method, and peer-reviewed studies -- not that there's anything wrong with that.  Meanwhile, however, we often dismiss indigenous knowledge, or the various ways that indigenous peoples, like the Comcaac, study and understand the natural world. 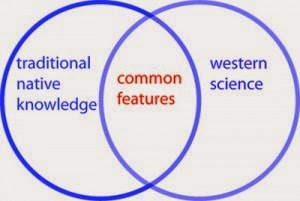 There are various useful ways of knowing the world.

In other words, we've been socialized to trust the word of a college-trained ecologist like Gary Paul Nabhan -- an outsider who has spent relatively little time in the Sonoran desert over the word of a woman like Amalia Astorga -- who has spent her life interacting with the animals in her local environment.  Therefore, it's a relief to read Astorga's own words, to hear her ideas and understandings.

Lastly, I like how Nabhan describes how the Comcaac people are in charge of their lives and their contemporary situation without casting them as victims or noble savages.  Their population is small, and there are pressures to assimilate into "mainstream" Mexican society, but these people aren't doomed.  Instead, adults "are actively teaching their language and traditions to their children so that language loss will never occur in their homeland" (p. 28).  They're real people facing challenges and preserving their cultural practices in the real world.

I find several aspects of this book problematic.  For instance, Astorga's story is sandwiched between several pages of introduction and epilogue from Nabhan.  Why does he have to frame her story?  Do we need a "real scientist" (i.e., someone holding degrees from US universities) to vouch for her?  Why can't we just focus on Astorga's viewpoints?  I'd really rather read her descriptions of her community in addition to her story about Efraín.

Also, I'm uncomfortable with the language Nabhan uses to describe the Comcaac.  First, he calls them "Seri" -- a name given to them by outsiders -- even though the local people prefer to call themselves "Comcaac."  Why not use their actual community name?  Then there's the phrase "endangered people" (pp. 4, 26).  Yes, I understand that he's quoting anthropologists, and yes, many indigenous people's traditional ways of living are under threat, but I just don't like that phrase.  In English, we so often use the word "endangered" to describe species of animals, so I'm not comfortable using that word to label humans.

Finally, I wish the publishers had invited a Comcaac artist to illustrate the book.  Janet K. Miller's illustrations are lovely, but I'd rather see art from the community.

Well, my response to this book is messy, but there it is.  What do you think?  Agree?  Disagree?  Let me know!
Posted by Unknown at 1:49 PM