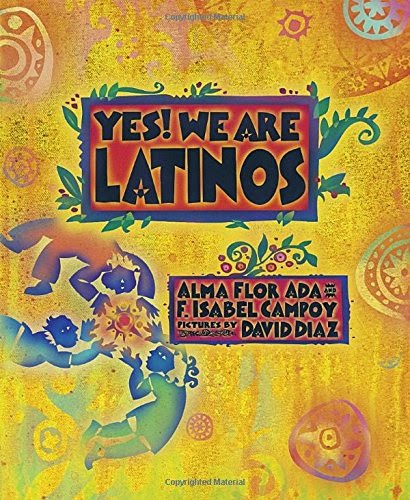 I've been wanting to review this book ever since it came out last year, and I'm so excited to finally share it with you!  Yes! We Are Latinos is a stunning collection of poetry created by two prolific writers and scholars, Alma Flor Ada and Isabel Campoy.  Whether working separately or as a team, Ada and Campoy always produce thoughtful, charming works of children's literature -- and with this book, they've outdone themselves.

The purpose of Yes! We Are Latinos is to share and explain the diversity of Latin@ people living in the United States.  Rather than being a homogenous group, Latin@s have different ethnic backgrounds, live in different parts of the country, and speak different languages.  Therefore, each clear, uncluttered poem represents a fictional individual who shares information about his/her background and life with readers.

For example, Susana -- who has Sephardic Jewish heritage -- loves listening to her grandmother sing old, traditional songs and is trilingual -- fluent in English, Spanish, and Ladino (also known as Judeo-Spanish).

Felipe -- who identifies as Panamanian, Venezuelan, and Black -- wants to protect his cousin Angelita, who has Down Syndrome, from verbally abusive bullies.  But he wants to be her "champion" through painting, not fighting (p. 60).

Best friends Lili and Michiko -- who are Guatemalan-Chinese-American and Peruvian-Japanese-American, respectively --  are excited to learn more about their immigrant grandparents' home countries and languages.  However, they're also tired of telling people that they can, in fact, be simultaneously Asian-American and Latina.

Supplementing these poems are informative prose explanations of various historical events (slavery, the expulsion of Spain's Jewish population in the Middle Ages, the Spanish Civil War) and ongoing practices (immigration, the struggle for indigenous rights in the Americas) that clearly explain how the past and present have shaped the various ways to be Latin@.  Meanwhile, David Diaz' intricate black-and-white cut-out illustrations emphasize the poems without distracting readers from the text.

By exploring their characters' roots, struggles, and hopes, Ada and Campoy show readers the nuances of being Latin@ and successfully stress how Latin@ people lead very different lives and construct their identities in their own ways.

Because of Yes! We Are Latinos' true and loving celebration of diversity, teachers can easily incorporate it into an anti-bias curriculum.  After reading the poems together, teachers can also encourage students to write their own identity poems in which they describe their cultural backgrounds, family histories, personal interests, and the intersections of these complex facets of their lives.

The poems are also wonderful resources for language learning.  Since Ada and Campoy weave Spanish seamlessly into their English-language verse, students of all language backgrounds can learn about the complexity of code-switching.  Moreover, the new Spanish translation of this book can be a great text for bilingual and Spanish as a Heritage/Foreign Language classrooms.

So go check out Yes! We Are Latinos!  But you don't have to take my word for it.
Posted by Unknown at 5:43 PM