Is there a certain genre of literature that doesn't really appeal to you?  You might try to enjoy that genre because lots of other people do, but it just doesn't feel right.  Maybe you feel like something's wrong with you because that genre seems so great, but for you, it's just... eh.

I have a confession: For me, that genre is superhero comics.  Several of my friends are really into Marvel and such, which I think is great -- they really enjoy that scene, and I'm happy for them.  But my attempts to enjoy superhero comics have been less than successful.

For example, I tried the new Ms. Marvel series and was impressed, but I didn't love it as much as I'd hoped to.  Kamala Khan is a great and complex character, the artwork is beautiful, and I appreciated exploring the cultural issues within the comics, but the series didn't touch me on a deeper level. 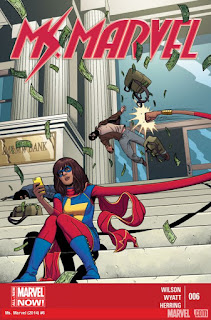 That's OK, though.  After trying Ms. Marvel, I decided to keep an open mind and listen to other suggestions from friends (and the kind and knowledgeable folks at my local bookshop).  That's how I found The Unbeatable Squirrel Girl. 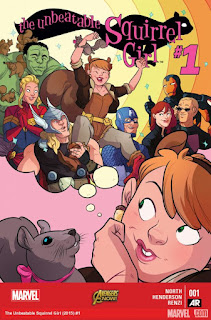 SQUIRREL GIRL IS THE BEST.  What really drew me in is the series' laughs and lightheartedness.  Squirrel Girl (aka Doreen Green) has a quirky, absurdist, silly sense of humor that makes me feel good, and she doesn't take herself too seriously.  Plus, she's smart, creative, and empathetic, which makes her a great role model for young comic book fans.  These comics fit me perfectly.  I'm so glad I gave this series a try -- it showed me that there are comic books out there for everyone, even people who aren't huge superhero fans.

So let my experience be a lesson to all of you teacher and parents out there.  If a kid doesn't like a particular type of literature, it might just be because s/he hasn't found the right book yet.  So keep looking and encouraging your students/kids to try different genres and formats.

Also, ultimately, it's OK to not particularly like a genre, and kids need to know that as well.  In life, we're not going to like everything we read, and even if we love one poetry/graphica/nonfiction/etc. book doesn't mean we're going to like ALL poetry/graphica/nonfiction/etc.  But it's still good to expand your mind with different styles of literature, even if they don't rock your world.

TL;DR version: Keep reading!
Posted by Unknown at 11:32 AM