A lot happens at the conference, including the announcement of the year's award-winning picture book (grades K-4) and chapter book (grades 4-8).  Students and teachers around the state vote for their favorite books, and this year's picture book winner was Ol' Clip Clop: A Ghost Story, written by Patricia C. McKissak and illustrated by Eric Velasquez -- no big surprise, since lots of kids love spooky tales.  (I wish Niño Wrestles the World had won, but we can't have everything we want.)

The highlight of the conference for me, though, was meeting artist/author Shonto Begay and hearing him speak about his experiences growing up in Arizona, attending the Institute of American Indian Arts in Santa Fe, and creating sumptuous paintings that capture the desert, Navajo cultural practices, his family and neighbors, and the "harsh realities of modern reservation life."  His art is "about praying, about sending out a universe of prayer," he said, and each swirl of color is "the visual representation of a chant, the syllables of prayers."  And he can Etch-a-Sketch like no other. 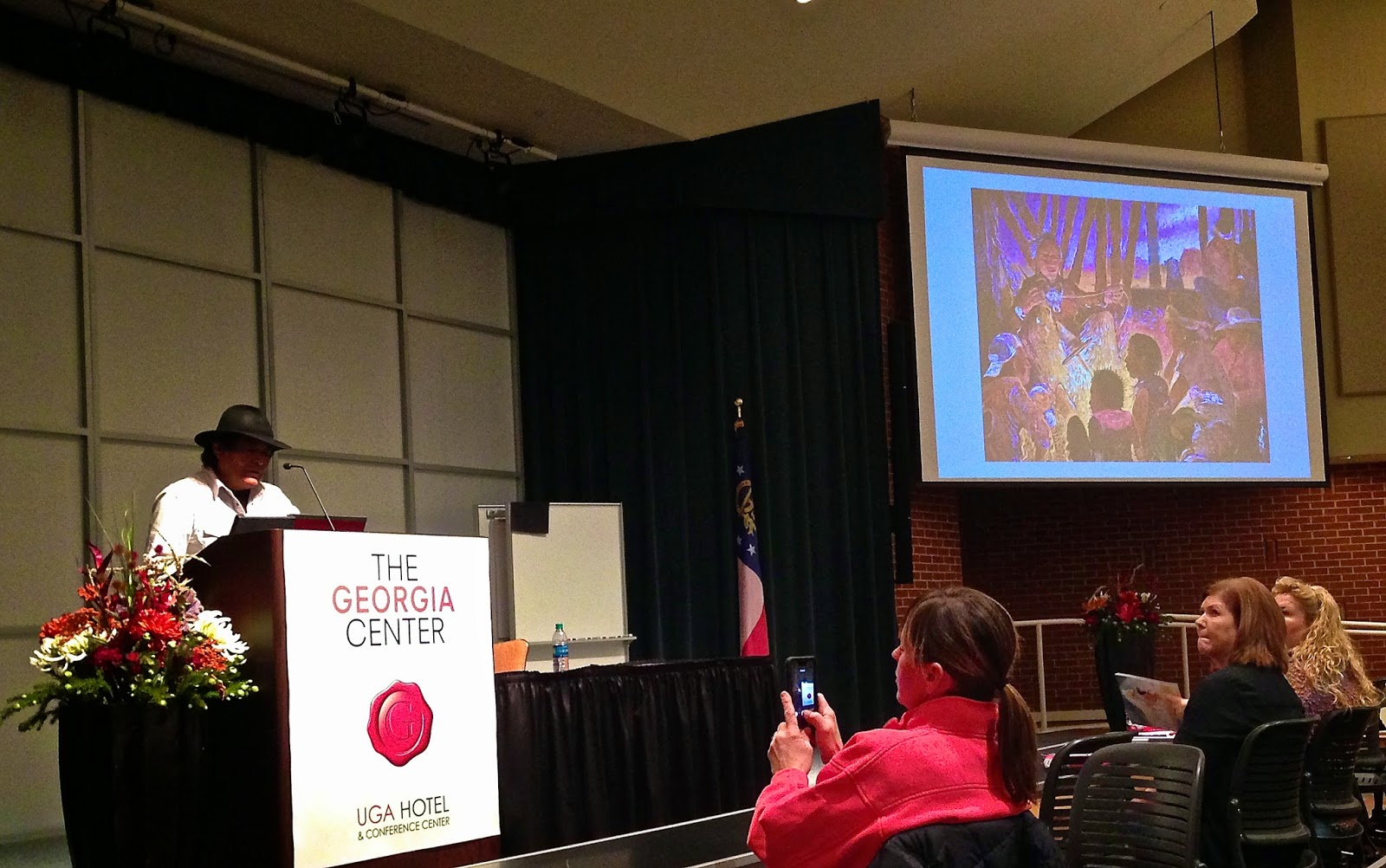 Mr. Begay also discussed his time at a boarding school -- school officials literally kidnapped him while he was tending his family's sheep and took him to the "brutal institution," where government teachers attempted to "cleanse" children of their language, religion, and cultural identities.  While he didn't go into much detail about his "educational" experiences, Mr. Begay did emphasize that these schools left "a whole generation traumatized" and that his time there greatly influenced his work.  The tragedies of Indian boarding schools are so often ignored by history, so I'm grateful that he shared his memories.  We need to confront this past, even if it's painful.

Later that day, I found a treasure in the bookstore (because yes, this conference has a bookstore!) -- Navajo Long Walk, illustrated by Mr. Begay and written by Joseph Bruchac.  A counter-narrative to the glorified story of European-American westward expansion, this book privileges the Navajo perspective on the Long Walk, a 450-mile forced march from a reservation in Arizona to the Bosque Redondo in New Mexico. 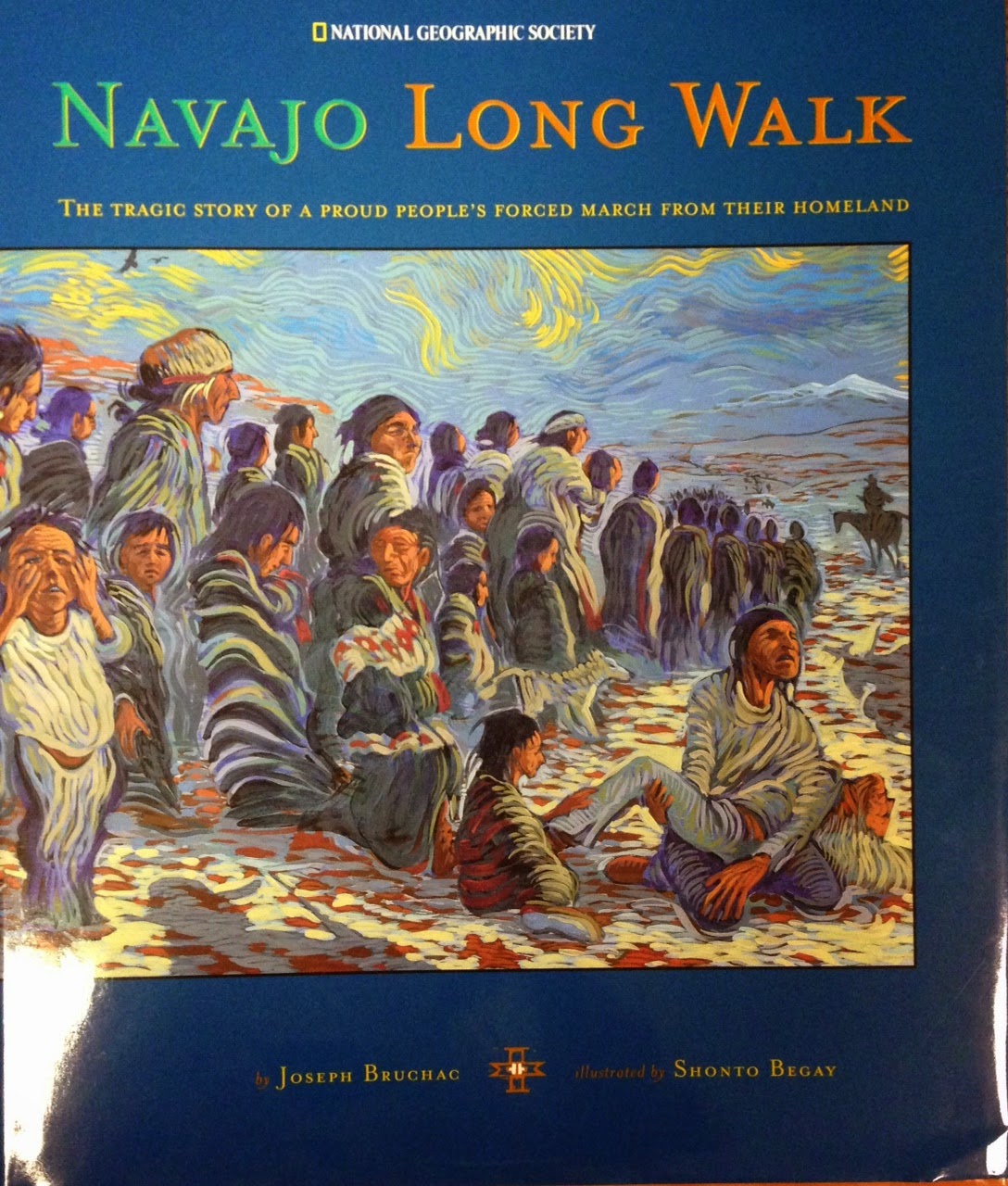 I've been studying depictions of American Indians in nonfiction children's books and have observed that the telling of American Indian histories is dominated by White historians (Wilson, 1996).  Traditionally, it's been somewhat difficult to find histories written and/or told by Native people about their own tribes and nations.  Furthermore, books about American Indians written by non-Native authors are often filled with harmful stereotypes, biases, oversimplifications, and generalizations (Noll, 1995; Reese, 2007) -- either that, or authors romanticize Native people, minimizing their humanity by depicting them as magical, "relentlessly ecological," noble savages (Slapin, Seale, & Gonzales, 1996, p. 20; Stewart, 2000).  Navajo Long Walk, however, is a history created by two Native people and gives voice to people who have long been silenced while avoiding stereotypes.  Highly recommended.

If you're interested in exploring Shonto Begay's other children's books, take a look at this Goodreads list.  Have fun!

Noll, E. (1995). Accuracy and authenticity in American Indian children’s literature: The social      responsibility of authors and illustrators. The New Advocate, 8(1), 29-43.