What's Skippyjon up to These Days?

As a teacher, I never liked the Skippyjon Jones series, although I could never explain why.  Well, I knew they were extremely difficult and annoying to read aloud because they're giant tongue twisters, but it was something more than that.  Now that I'm more familiar with the study of multicultural children's literature, I can name the vague sense of discomfort every time a student asked me to read one of these books.

To quote Skippyjon Jones and the Big Bones, they're "insane-o."

For those of you who aren't familiar with the series, it centers on a Siamese kitten who wants to be a Chihuahua and goes on wild adventures with his imaginary chihuahua friends.  Together, they speak a good deal of mock Spanish by adding -o and -ito (e.g., "Jurassic-o, " "marshmallocito") to the ends of words.  Lots of fake Mexican accents ("reelly, reelly beeg"), negative portrayals Mexicans ("crazy-loco," banditos, etc.), and very inauthentic uses of the Spanish language. 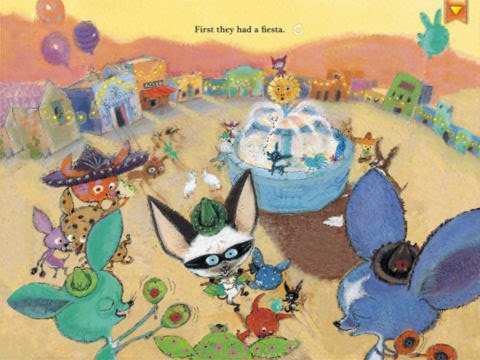 Carmen Martínez-Roldán, professor of bilingual/bicultural education at Teachers College, wrote a very interesting study about these books a couple of years ago, in which she examined stereotypes and mock Spanish that permeate them.  These depictions of ethnicity and language, she argued, can negatively impact young Spanish-speaking, Mexican-heritage children's self image, while also filling other children's heads with shallow, inaccurate, and unfair perceptions of how Mexican people speak and act.  However, she also pointed out that these books can be useful tools for helping children practice critical reading skills and uncover and discuss harmful depictions of culture and language.  Here's a link to the abstract (and if you'd like to read the full article, head to a university library website and download it, or, if you don't have access to one of those, the nice people at your local public library can probably help you find a copy).

Dr. Martínez-Roldán isn't the only person critiquing the series.  Just take a look at readers' reviews on Amazon and GoodReads or this review at De Colores, and you'll see that lots of people have had negative reactions.

So the other day, I saw the newest Skippyjon book, Snow What (2014), and was immediately seized by curiosity. 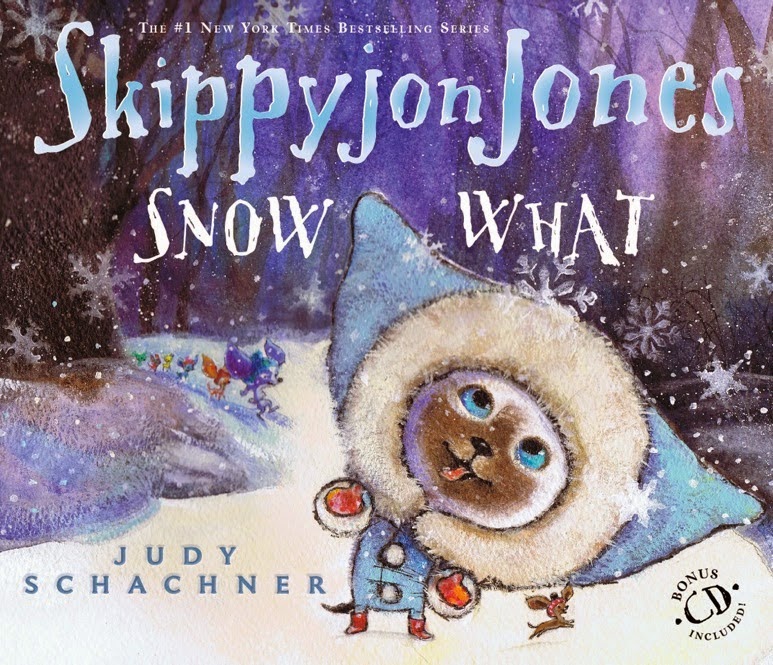 Judy Schachner, the author/illustrator, has been receiving a fair amount of criticism for years now, so I wondered whether she had moved away from the stereotypes.  Here's what I found, starting with the description of the book on her website:


Mirror mirror on the wall, who is the bravest Chihuahua of them all? Skippyjon Jones, the Siamese cat who thinks he’s a dog! While his sisters listen to Snow White and the Seven Dwarves, Skippy bounces on his big-boy bed and heads off for the REAL adventure awaiting him in his closet. Once inside, he finds himself in a magical snowy forest of make-believe, where the seven Chimichangos challenge him with his most dangerous task yet: to wake up Nieve Que [sic], the frozen princess, by kissing her! Yuck! Will this hero agree to don a prince’s pantelones [sic] and save his poochitos?  With rhymes, rollicking wordplay, and mucho fairy tale fun, this fuzzy tale is sure to end happily ever after.

(Note: One of the gags in the book is that Skippyjon keeps saying "Snow What" instead of "Snow White."  "Nieve Qué" is a literal translation of "Snow What," and... yeah.)

OK.  So far we see "Chimichangos," "poochitos," and a random mucho.  Also, pantalones is spelled incorrectly.  Onto the book.

While there aren't any obvious stereotypes about Mexicans in this book, there's still plenty of "rollicking wordplay" that involves slapping -o and -ito onto the ends of words: "Skippito Friskito," "smoochito," "indeed-o."  In an interesting twist, there are also a lot of correctly used Spanish words that readers can figure out and learn from context and illustrations.  For example, one of Skippyjon's chihuahua friends grumbles, "Some dog has been chewing my zapato," while holding a shoe in his mouth.  But does this linguistic choice make up for the rest of it?  Not for me.

Finally, there's this video: an interview with Judy Schachner, in which she describes Snow What and discusses her inspiration for Skippyjon.  Based on what she says, I don't think she's changed her mind about mock Spanish and stereotypes.  (Also, despite his portrayal of Zorro and other Mexican characters, Antonio Banderas is from Spain, not Mexico.)

I've heard people defend the Skippyjon books because they're fun and promote creativity and imagination.  According to some reviews I've read, others like them because they introduce children to Spanish.  But there are so many other picture books that simultaneously celebrate imagination and humor and affirm language and culture.  Why not go for those books instead?

I think a lot of parents and kids stick to Skippyjon because he's familiar, cute, seemingly innocuous, and extremely popular.  They might not know about the more culturally sustaining literature out there in kidlit land.  What we can do is (gently) point out the problematic elements in the series and then suggest fun, Spanish-containing, culturally sustaining books.  We can ask booksellers to prominently display more bilingual and "code-switching" books (texts that are in English but contain some Spanish words) so that shoppers notice them.  And we can share book reviews and other multicultural children's literature resources to help get conversations started.  Here are a few that I've found especially helpful:

Long story short: Skippyjon Jones is still up to his mock Spanish ways -- use those books for critical reading.  Buy other books to teach Spanish and learn about Mexican cultural practices.  We can do so much better.
Posted by Unknown at 12:07 PM