While growing up in Houston, I attended a school that attracted A LOT of international families.  I'm so grateful for my many years at this school, since diversity was a normal part of my life from the very beginning.  I had friends and classmates whose parents came from India, Pakistan, Malaysia, Taiwan, Vietnam, Mexico, Argentina, Norway, the UK, Australia, and Germany; and my friendships with these kids exposed me to different cultural practices and (especially interesting to me) religions.

Quite a few of my friends were Hindu and Muslim.  But I never, never, never encountered any children's literature about these religions as a child, not even in these friends' homes.  In the late 1980s and early 1990s, I could find plenty of books about Christianity at Sunday school.  Meanwhile, there were a few books depicting Jewish themes, but seriously nothing that my Hindu and Muslim friends could read that reflected their experiences with religion.  (Or at least nothing you could find at a big-name bookstore or in the school/public library.)

Fortunately, things are finally changing.  A school librarian friend of mine recently introduced me to a book called Golden Domes and Silver Lanterns: A Muslim Book of Colors (2012), written by Hena Khan and illustrated by Mehrdokht Amini.  Just take a look -- the art is exquisite. 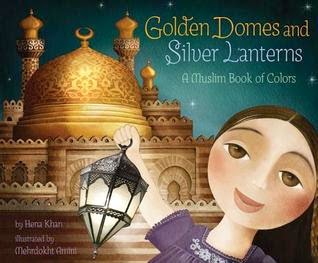 Not only can this book affirm Muslim children's cultural and religious identities, it can serve as an excellent introduction for children from other faith backgrounds to Muslim practices.  Golden Domes and Silver Lanterns is a great start.

"Start" is the key word.  We need to see more books portraying the day-to-day experiences of Muslim characters on the market.  There's still a lot of prejudice out there, as we can see from controversies over this book: last year, there was quite a hubbub at a Scholastic Book Fair and a Twitter debate between a reviewer and an anti-Islam activist.  Reading more about regular people who practice Islam is a good way to squash fear and foster tolerance and appreciation.

Another book that I'm very excited about is Ganesha's Sweet Tooth (2012), written and illustrated by Sanjay Patel and Emily Haynes.  (An artist at Pixar, Patel has also created three other books about Hindu themes.) 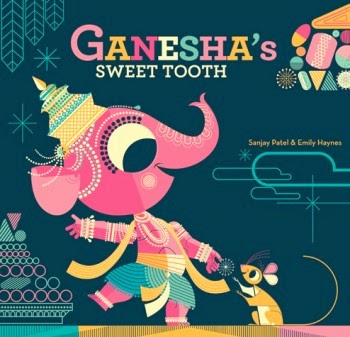 This delightful, gorgeous volume presents a tale about Ganesha, a Hindu deity, when he was just a tyke.  Like Golden Domes and Silver Lanterns, this book serves as a great introduction to a religion that's woefully underrepresented in U.S. children's literature.  I'd love to see more books by Patel and others that can continue children's exposure to Hindu themes and characters.

Do you know of any other great books that feature religion?  Let me know!
Posted by Unknown at 10:34 AM