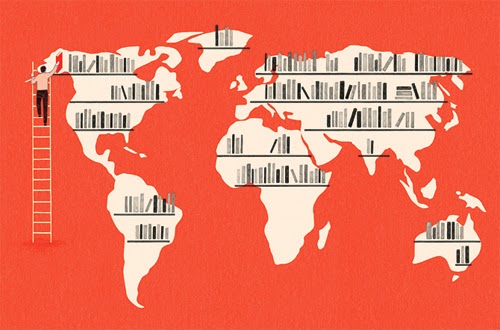 I’m taking a course on international children’s literature this semester, so the subject has been on my mind a lot.  Here in the United States, we take our huge publishing industry for granted and sometimes assume that most of what we read originated here.  Sure, we know that authors like J.K. Rowling, Roald Dahl, and Beatrix Potter are/were British.  Many are also aware that L.M. Montgomery – who penned Anne of Green Gables – was Canadian.

But did you know that Marcus Pfister is Swiss, and that his ever-popular The Rainbow Fish was originally published in German?  Or that Pippi Longstocking and her creator, Astrid Lindgren, were Swedish?  I fell in love with Anno’s Alphabet and Anno’s Counting Book as a child and never knew that (Mitsumasa) Anno was Japanese.

Reading a wide range of books with international origins benefits children because it can make them aware of places, customs, and viewpoints outside their own cultural spheres.  Valuing such texts can help them appreciate the fact that the United States isn’t the only country in the world that matters.

However, it can be difficult to obtain picture books from other countries.  For example, I want to get my hands on more Latin American books, but until recently, I didn’t really know where to look -- and those big online booksellers aren't much help.  It’s become easier lately to find books by Latin@-American authors and illustrators at US bookstores, but books actually published in Bolivia or Guatemala or Colombia?  Not so much.

There are plenty of reasons why this dearth of international children’s lit exists.  Some countries just don’t publish a large amount of children’s books by local authors because they import books from other places, or their publishing companies don’t have enough capital to generate a large selection of books (Misheff, 1994; Stan, 1999).  Another issue is translation – it can be expensive and difficult to find translators here in the US, and translated books don’t sell as well as English-language books written by American authors (Freeman & Lehman, 2001).

The common factor: money.  Companies require lots of it to keep publishing and translating books, and if consumer demand isn’t there, then publishers look for more lucrative options.  Some countries, fortunately, have come up with solutions to this problem.  For example, Norway’s government provides subsidies to publishers, while Mexico has established an annual international children’s book fair (Stan, 1999).

Unfortunately, these solutions don’t always bring more books to our shores.  So now, having critically examined and questioned the situation, we need to come up with a plan of action to address the problem.  What can we (parents, teachers, and students) do to support international publishers and help bring more quality literature to the US from overseas?  My classmates, professor, and I did some brainstorming, and we came up with these ideas for increasing demand:

Have fun exploring, questioning, and making a difference!


The Marsh Award (for translation)