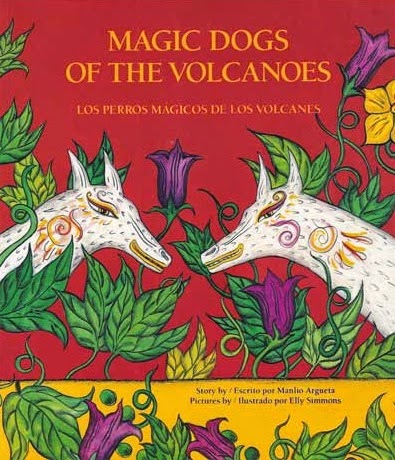 Imagine a picture book that can be a powerful, entertaining, and appealing educational tool for preschoolers and high schoolers alike.  Drawing from the folklore of his native El Salvador, renowned author and political activist Manlio Argueta delivers with Magic Dogs of the Volcanoes / Los perros mágicos de los volcanes.  In this book, Argueta introduces readers to cadejos, mythical Central American creatures with the looks of a wolf and the grace of a deer.  According to legend, cadejos live around volcanoes (who are their great-great-grandparents), eat the seeds of morning glory flowers, and protect the local people from harm.

Everyone loves the cadejos and their kindness, except for Don Tonio, a rich landowner, and his thirteen brothers, who employ – or overwork, rather – the townspeople.  These men believe that the cadejos’ care makes the people weak and lazy, so they call upon some “lead soldiers” to get rid of the kindly creatures.  Fortunately, the cadejos have the power of invisibility, which helps them evade the soldiers at first.  However, when the men begin killing the morning glories, the creatures’ only food source, the cadejos’ volcanic ancestors must come to the rescue.

This book has something to teach students of all ages.  Younger children will enjoy the magical story, experiencing the folklore of El Salvador, and learning how another culture values and respects the natural world.  They’ll also love Elly Simmons’ detailed, earth-toned pastel illustrations, which clearly convey the candejos’ friendly mischief and bring the massive volcanoes to life.

Meanwhile, Argueta’s tale is also perfect for older students interested in Latin American history and politics.  Written during the final years of the Salvadoran Civil War – during which oligarchs and the military oppressed and terrorized rural civilians – Magic Dogs of the Volcanoes / Los perros mágicos de los volcanes mirrors this turmoil with its portrayal of conflict between the elitist Don Tonio, his lead soldiers, and the townspeople who must rely on their (super)natural surroundings for help.

Moreover, the book’s side-by-side bilingual format makes it a helpful text for Spanish and English learners of any age.  Argueta’s inclusion of words unique to Central America, such as cadejo, cipote (child), and the local names for two volcanoes (Tecapa and Chaparrastique) gives the language a distinctly Salvadoran flavor. 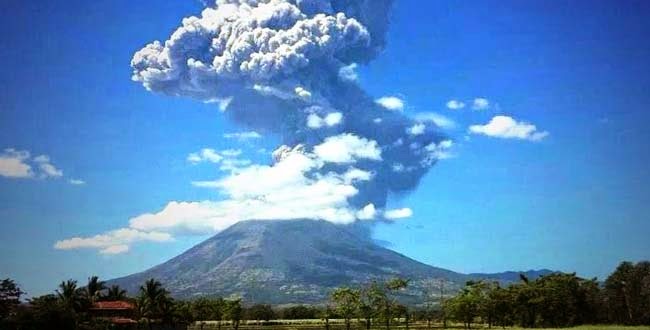 I’m so grateful that I stumbled across this multifaceted tale in my local public library, and I recommend that you run out and borrow or buy a copy – you won’t regret it.  Also, for more information on the author and teaching this book, check out the following links: