This past week, I re-read Elisa Amado's 2007 picture book, Tricycle, for a book club focusing on international children's literature. 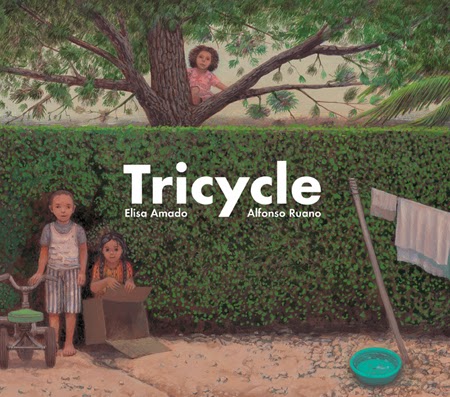 With its exploration of classism and socioeconomic inequity, Tricycle definitely isn't a light read, but it's engrossing and more than a little thought-provoking.  Here's a summary from Children's Book Writer:

"Tricycle is about a girl, Margarita, who lives in a big beautiful house, surrounded by a big tall hedge. She climbs the tree in her backyard and sits in the branches. From this vantage point, she can see the volcano that sits in the distance, spewing fire and smoke on a daily basis. She can also see the shack next to her home where a poor family lives. Margarita sometimes climbs into the hedge, where she plays with Rosario, her little friend who lives in the shack with her brother and mother. One day, Margarita watches silently from her perch in the tree as Rosario and her brother steal her tricycle, dragging it to their side of the hedge, hiding it under a box. In thirty-two pages and in less than one thousand words, a complete, beautiful story is brought magically to life. It has a heartbeat and a pulse that you don't normally see in the average picture book. The emotional build-up is slow and steady, with an effective use of the volcano -- Fuego -- as a symbol for the uncomfortable undercurrent between rich and poor, as well as the symbol of developing conscience in the child. The reader sees the difference between those who have, and those who have not, and the beginnings of conscience in a young child. Which is more important - a tricycle or friendship? Having possessions or having concern for others? What is the responsibility of a child - do you worry about yourself, or all of those around you? Do you lie to protect a friend? From the safety and comfort of her family, a child learns to have empathy and compassion for others, even if it means losing something in the process."

In order to prepare my presentation on the book for my friends, I headed to Amazon's website to gather some publication details, like the intended age range.  However, something else caught my eye: the customer reviews.  I noticed that seven people had reviewed Tricycle, and most of them had rated it one star (out of five).  Here are some examples of their feedback:

Harsh.  Everyone's entitled to their opinions, obviously, but the severity of these reviews caught me off guard.  Words like "inappropriate," "bizarre," "weird," and "horrible" seem so extreme and unnecessary for what I see as a sensitively wrought examination of poverty and class differences.

So this incident makes me think: Why is there such dissonance between these reviewers' opinions and my own?  It all comes down to views on childhood, really.  Here in the US, lots of people believe that adults should shelter children from the bad things in our world, and this view permeates children's literature.  According to the Amazon opinions above, children's books should contain three things: positivity, moral lessons, and happy endings.

I have encountered this position a lot as a teacher and as a grad student.  If books aren't "uplifting, encouraging, or humorous" and don't have a clear plot resolution, many parents and educators don't want them in their homes and classrooms.  However, many books from other countries (and some from the US) don't always fit this mold.  Some people, both at home and abroad, feel that kids need to learn about challenging issues in our world and that children's literature should therefore tackle heavier issues.

Elisa Amado is originally from Guatemala -- a country where poverty, class division, and crime are very common -- so it's no surprise that she would want to address these problems in her work.  Although these issues aren't quite as widespread here in the US, they definitely do exist.  I personally feel that discussing these realities with children -- once they're mature enough to comprehend them -- can help them learn to cope with the difficult and uncertain aspects of life and to think critically about societal problems. 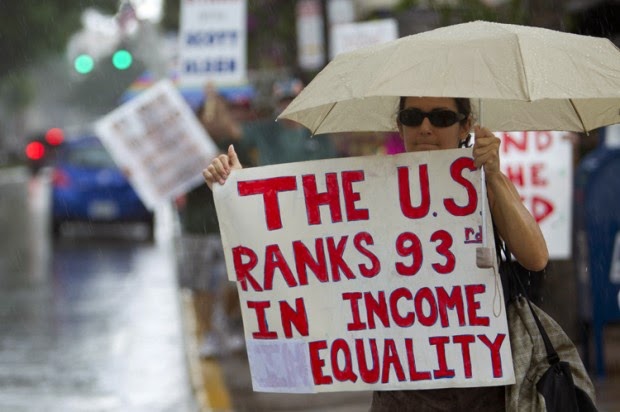 And even if someone doesn't agree with that perspective (which is fine!), it saddens me that they'd use such unkind vocabulary to describe a book like Tricycle just because it doesn't fit their definition of "children's book."  Much to my relief, one of the Amazon reviewers agrees with me:
What do you think?  Should children's literature help protect kids from the bad things in the world?  Or should it present the world as it really is?